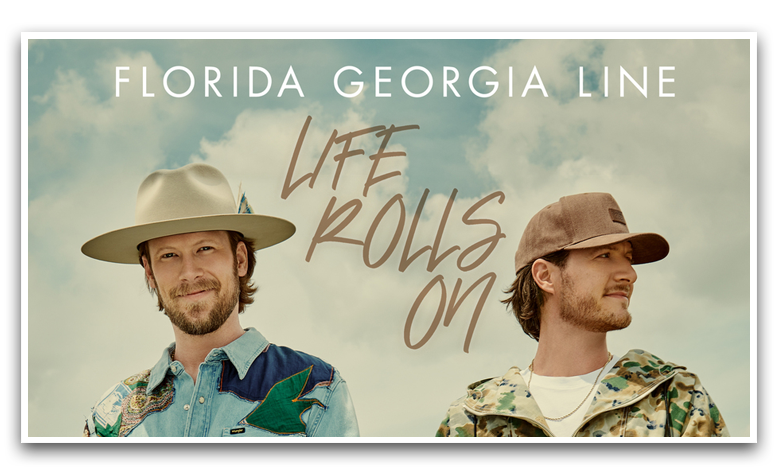 Anchored by a title track whose optimistic message encourages resilience in whatever uncertainties may come: “Oh and I know it might be alright, might be all wrong / But life rolls on / And on and on and on,” LIFE ROLLS ON reflects FGL’s growth not just as entertainers, but as husbands and friends. Their first full-length album co-produced with Corey Crowder, FGL doubles down on what the superstar duo does best: deep grooves, earworm hooks, and carpe diem-style songs for anyone who loves life, loves God, and loves having a good time.

Listen to Life Rolls On

A performance of “Long Live” on ABC’s Jimmy Kimmel Live! Tuesday (2/16) kicks off the album release party vibes ahead of a full-band concert, “LIFE ROLLS ON FROM THE FGL HOUSE,” at the pair’s Nashville, TN-based venue. Teaming up with Amazon Music and hosted by CMT’s Cody Alan, the exclusive global livestream starts at 8 p.m. CT Wednesday (2/17) on the Amazon Music Twitch channel and within the Amazon Music mobile app via the new livestreaming functionality by Twitch and Amazon Music. The show will also be available to watch on the Amazon Music Twitch channel for three days following. With FGL House located in the heart of downtown Nashville, Amazon Music, FGL, CMT, and Big Machine Label Group have each donated to The Community Foundation of Middle Tennessee's Nashville Neighbors Fund to support local merchants affected by the Christmas Day bombing. Grants from the Fund are made available to nonprofits providing services for both immediate and long-term needs for those impacted from the explosion. Fans can learn more about the Fund by visiting cfmt.org/NashvilleNeighbors or donate during the livestream on Tiltify.

On Friday (2/19), FGL will top off their week-long album celebration with the “iHeartCountry Album Release Party with Florida Georgia Line” held by iHeartMedia. Beginning at 7 p.m. (local time), fans can access the livestream via LiveXLive and broadcast across iHeartMedia’s Mainstream Country radio stations. Hosted by iHeartRadio’s Brooke Taylor, the virtual festivities will include a performance, exclusive interview, and needle drops from LIFE ROLLS ON.